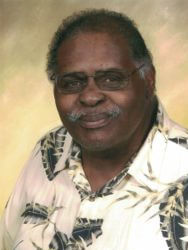 Alex Bernard Washington was born October 27, 1950 to Alex and Bernadine Williams Washington in Savannah, Georgia. Bernard was baptized at an early age and was a devoted communicant of Resurrection of Our Lord Catholic Church where he served as an altar server as a young boy.

He attended St. Anthony’s Catholic School and was a 1969 graduate of Tompkins High School. He was employed with Savannah Sugar Refinery, Goodwill Industries and National Electric Gate Company. Bernard was also the caregiver for his father for many years.

Bernard was a member of the Holy Name Society and The Knights of St. Peter Claver Council 278 where he was a former Grand Knight. Bernard also served on The Parish Council Steering Committee. Bernard was known for his coffee that he made after Mass on Sundays in the parish hall.

On Thursday, December 8, 2016 Bernard went to his heavenly home where his legs won’t hurt him anymore.

The family will receive friends on Monday, December 12th from 10:00 A.M. to 11:00 A.M. at Resurrection of Our Lord Catholic Church. The Mass of Christian Burial will follow at 11:00 A.M. from the Church. Interment: Woodville Cemetery.

Offer Condolence for the family of Alex Bernard Washington