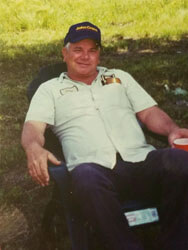 Hubert R. “Hoss” Underwood, Sr. passed away after a long illness Thursday morning, September 8th 2016 at home.  Born into a large farming family in Bulloch County, he had fifteen brothers and sisters.  As a teenager, he would meet Ann Edwards, his future wife, while working at the Farmer’s Market.  He joined the US Navy and would serve during the Vietnam War as a fireman/welder/shipfitter onboard the USS Taconic.  After leaving the service in 1971, he returned to Georgia and resumed working as an electrician.  He retired from Ross Engineering in May 2015 as a licensed Master Electrician.

Hoss and Ann would make a home for their children in Savannah, Georgia.  Together, they would always be ready with a helping hand for family, friends and neighbors.  It was common for them to welcome others to their table.  Many children thought of Hoss and Ann as second parents.  Hoss enjoyed gardening, baking (notably pound cakes), homemade hot sauces, and winemaking.  He was renowned for his fun-loving pranks on friends and family.  He enjoyed crafting stainless steel pieces and gifting them.  The holidays were always special in their home with the family gathering.  In the spirit of giving, Hoss and Ann always made sure that every child that visited had a present at Christmas.

It was not just the lives of family that he enriched.  He shined the light of his heart on his coworkers.  With a generous spirit, he would share his lunches with those who did not have one.  Ann would get up early and pack extra sandwiches so he could share them with his friends.  With a joyous spirit, he would play his pranks to brighten the day.  Whether it was a special pound cake made with hot peppers or a tiny hole punched in the edge of a soda can, his sense of humor was beloved by those around him.  With a inquisitive spirit, Hoss was always eager to learn new things and teach his trade to others.  His own son, Rusty learned much of the trade from his father.

Visitation at Families First Chapel at 10:00 AM Saturday, September 10th.  A service will follow at 11:00 AM.  Interment at graveside will begin at 2:30 PM at Friendship Baptist Church in Statesboro.