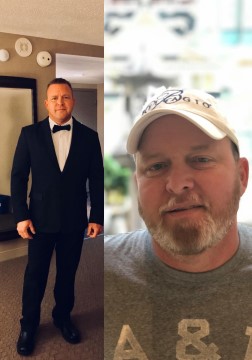 Jason hated how obituaries read. Always stating how someone fought a courageous battle against cancer. Jason wanted everyone to know that he hated the “C” word, he wanted everyone to remember him for his gigantic muscles, and that he passed as a result of telling Dr. Spellman that “she could dig a hole, push him in it, and throw the walker in on top of him.” That, and of course, too many cream sodas. He gave Stage 4 Metastatic Melanoma he!! in true Fighting Irish Spirit since he was diagnosed in May of 2018. Jason lived everyday to its fullest surrounded by his loving family and pets. He gained his wings on June 20th at his home in Richmond Hill at the age of 49.

Jason was employed by Terminix and spent his days making friends; He enjoyed good music, fishing, was a huge animal lover, and truly loved his Notre Dame Football.

He is survived by his wife, Naomi Simmons, his children Kelsea Simmons Lucas, Jason Bradley Simmons Jr, Johnathan Brody Simmons,(and their mother, Celeste Brinson Simmons) and Bentley Keaton Ring. His step children Ashley Nichols, John Tyler Addison, and Shelby Wettlaufer will remember him fondly as the greatest dad. Jason adored all of his grandchildren Hannah, Maycee, Brantley, Braylee, Willy, and Jordyn. He was preceded in death by his iconic father, Johnny Earl Simmons. He is survived by his loving mother Janice Simmons of Wilmington Island, his amazing sister Dawn Simmons of Kansas City. The Simmons Family and Brinson Family will always remember him fondly. Most importantly he leaves behind his precious cat, his pride and joy, Shadow Puss.

He would like everyone to yell a “Go Irish” from time to time in his memory.

A go fund me page was set up by his employer at the beginning of his journey and donations can be made in lieu of flowers as a memorial award in his memory will be established.
Jason Simmons Cancer Relief Fund
https://gf.me/u/yajwm5

We ask that everyone attending come dressed in Navy Blue, Gold, Green or Notre Dame attire.
Masks will be provided.

Offer Condolence for the family of Jason Bradley Simmons