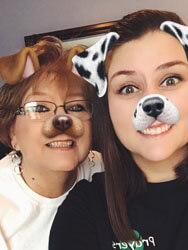 Trying to sum up a person’s life, who they were, the impact they made on the people in their life, their existence, and their accomplishments, can hardly be done in a few short paragraphs.

Mary was my mom.

She was the epitome of strength, your most loyal friend; you could walk softly because she was behind you as your big stick. She, like most, hit a few bumps in the road, but always came through it humbled and stronger.

She was a loving daughter, mother, sister, and aunt. She was born on November 26, 1965 in Laurel, Maryland. Although born in Maryland, she was raised in Savannah, Georgia. She graduated from Alfred E. Beach High School in 1984. She then went on to obtain her cosmetology license. In 1995, Mary welcomed her only child Brittany, into the world. February 2002, she married the love of her life and father of her daughter, Derrick R. Clark. In 2008, while successful in completion of the requirements needed for Dental Assisting, she was unable to further pursue a career due to a diagnosis of Multiple Sclerosis. Instead, she worked alongside her father at his local hair salon.  In March of this year (2016), she was unexpectedly diagnosed with Stage IV Lung Cancer. The word cancer, alone, is devastating, but paired with stage IV is almost unimaginable- except it’s not, it actually happens.  After the initial shock, my mother told me, “I have too much to live for, I will not go down with out a fight.”

After completing ten rounds of radiation, one cyberknife treatment, four rounds of “hardcore” chemotherapy, she then moved on to a less toxic chemotherapy. Unfortunately, after one round of the “baby stuff” (maintenance chemo), her health started declining. With many blood transfusions, and multiple long stays at the hospital; Mary came home with the care of at home Hospice.

On Monday, November 7, 2016, my mom did NOT lose her fight against cancer, she won. She is now in a place where cancer does not exist. Where chemotherapy, blood transfusions, platelets, and oxygen tanks are not required for a decent, tolerable, life. In my opinion, that is a win, not a loss.

Visitation will be Friday, November 11, 2016 from 1 to 2 pm with a funeral service following at 2 pm at the Families First Funeral Care Chapel. Burial will be in Hillcrest Abbey Memorial Park – West.

Offer Condolence for the family of Mary D. Hildreth