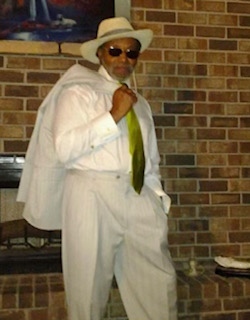 He was educated in the Savannah Chatham County School System. He learned the trade of auto body and paint from Hollingsworth Auto Service, in Savannah, Georgia. Mr. Shelly Anderson Jr  would later become a master auto body and paint repair professional, which lead him to become a restorer of classic cars a job he loved with all of his heart.

In 1959 he moved his family to Harlem in New York City where he raised his six children and one grandchild in Drew Hamilton Houses until 1983. He would later move back to Savannah and opened his own auto body and paint shop called Quality Paint and Body Shop.

Mr. Shelly Anderson, Jr., gave his life to Christ and was baptized and later became an ordained Deacon of St. James Baptist Church on August Avenue, under the leadership of the late Pastor William Russell. His passion for singing lead him to join the William Russell Choir and St. James Senior Choir. He would later move his membership to Jonesville Baptist Church of the P.A.W. under the leadership of Bishop James G. Rodges, where he was baptized again in Jesus name and ordained as a Deacon were he sang in the Jonesville Senior Saints Choir.

He is proceeded in death by his parents, and four siblings.

A visitation will be held for Mr. Anderson on Thursday September 8, 2022 from 6pm-8pm at Families First Funeral Care at 1328 Dean Forest Road Savannah, Georgia 31405.

A service will be held for Mr. Anderson on Friday September 9, 2022 at 1pm at Jonesville Baptist Church, located at 5201 Montgomery Street Savannah, Georgia 31405.

Offer Condolence for the family of Shelly Anderson Jr.