Kyle has been serving as President of Families First Funeral Care and Cremation Center since he founded it in April 2013. In addition to his leadership roles at the funeral home Mr. Nikola also holds a number of executive roles within industry associations and speaks across the United States as an industry expert at numerous conventions. He is the Immediate Past President of Georgia Cemetery Association and the 1st Vice President of the Southern Cemetery Cremation and Funeral Association. Mr. Nikola was awarded the Small Business Chamber’s New and Emerging Business of the Year in 2009 for Bonaventure Funeral Home and recently won the Buy Local and Small Business Chamber’s Business of the Year for 2014. He earned a degree in Business Administration from The Ohio State University’s Fisher College of Business. Kyle is a parishioner at St. John the Baptist.

Clifford James (C.J.) Neesmith is a native of Port Wentworth, a 1971 graduate of Robert W. Groves High School and a 1974 graduate of the Gupton-Jones College of Mortuary Science in Atlanta, receiving his Funeral Director’s and Embalmer’s licenses in June of 1975. Becoming infatuated with the Metropolitan Atlanta area, C.J. remained there for thirty-four years before returning home in 2007. Past President of the Port Wentworth Lions Club, past Chair of the Board of Directors for the Port Wentworth Chamber of Commerce, and a member of the Port Wentworth Christian & Missionary Alliance Church, C.J. takes great pride in serving his local community.
C.J. worked as Funeral Director and General Manager for Bonaventure Funeral Home from May of 2012 until the opening of Families First in March of 2013, assuming those duties at the new establishment. 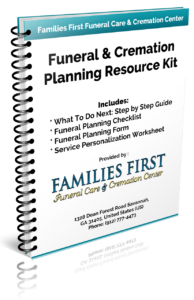