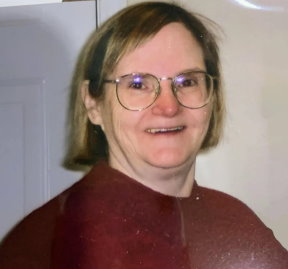 Peggy was born in Asheville, North Carolina to Louise Edenfield and Walter Holmes on October 24th, 1946. Shortly after graduating high school she enlisted in the Air Force. While in the Air Force she met her future husband, Robert Del Soldo. They were married on September 16, 1967 in Brunswick, Georgia and would have celebrated 55 years of marriage this year.

After two years of service and an honorable discharge, Peggy and her husband found their way to Horsham, Pennsylvania. She worked full time, supported her husband’s career all while raising her children. She spent any free time traveling and cheering her kids on at many soccer, softball and baseball games. She spent time with friends after her kids were grown and found that she loved scrapbooking and captured amazing moments that her family and friends can enjoy today.

Peggy retired after a long career with Prudential and shortly thereafter the couple relocated to Georgia. She and Robert welcomed her mother, Louise, into their home where she cared for her for the next 8 years. Prior to a health crisis in 2018 one of her favorite hobbies was counted-cross stitching. She loved sharing her work with others and several family members and friends still proudly display her work. Peggy fought hard to not let her disabilities get in her way. She enjoyed spending time with her family, especially with her grandson, Griffin, who lived with her. Even when it was difficult (thanks to modern technology) one of her favorite pastimes was not affected. Peggy was an avid reader for as long as her family can remember, sometimes reading as many as 6 books a week.

Peggy is preceded in death by the recent passing of her husband Robert Del Soldo; her parents, Louise and Walter Holmes.

Peggy is survived by her children, Theresa Haber and Bob Del Soldo and their spouses, Jason Haber and Crystal Del Soldo; her brother, Larry “Twiggy” Holmes; and her niece and nephew Lisa Palmer and Bill Borrelli; She was a proud grandma/ga to Paige Haber and Griffin Del Soldo and will join her husband, Robert, as one of their guardian angels.

There will be no service at this time as her family is pursuing their parents’ wish for internment at Washington Crossing National Cemetery in Newtown, Pennsylvania. The family will provide details when they become available.

Offer Condolence for the family of Peggy Del Soldo