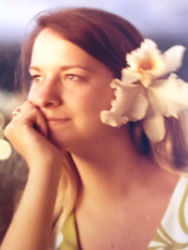 Pooler, GA- Penelope Padgett Young “Penny”, 68, died September 10, 2016 at home in the presence of her family and friends. Her life of gentle, compassionate concern for others was cut short after battling a progressive neurological disease.  Born to loving parents, Donald Lewis Padgett, Sr. and Ruth Henrietta nee Wills Padgett in Charlottesville, VA, the family moved to Atlanta Georgia where she attended D’youville Academy and debuted at the Cherokee Country Club in 1967. She developed her talents and pursued a music major at the University of Georgia.  There she met the love of her life, Elmer H. Young, III “Pete” and they were married. This union produced four children.  The couple much later divorced.

Her talents were shared with family and the community through song and guitar, one of her favorite expressions of love, along with embroidering gifts for family and friends.  Among her many other interests, she was an avid reader of science fiction.  Self-taught in computer programing, she was employed in that field for many years.

Devoted to her family and Catholic faith, Penny shared her knowledge and spirituality with the community as a Team Leader in the Marriage Encounter Program for the Savannah Catholic Diocese and was a member of Cursillo #42.  She was an active member of Our Lady of Lourdes, St. Bendict’s, St. James, St. Anne’s, and St. Frances Cabrini Catholic Churches over her life time. Most recently, Penny attended the new Pooler Catholic Community and became a member of the Pooler Senior Center.

Penny was deeply struck by the Iraq War death of her beloved youngest son, John Young, in 2007.  Thus, she channeled her grief by providing comfort and aid for other bereaved military families as a Peer Mentor for the Tragedy Assistance Program for Survivors (T.A.P.S.).

The family is forever grateful for the selfless dedication and support of Deborah Heddendorf and Diana Endres during this last year.  You are truly angels amongst us. Instrumental in Penny’s care and that of her own mother’s serious illness was granddaughter, Kendall Byer, who was supportive above and beyond what expects of one so young.  The family would like to recognize the contribution of the staff of Gentiva Hospice, with special thanks to Crystal and Catherine.

Visitation will be held at Families First Funeral Care on Dean Forest Road in Savannah, Thursday September 15, 2016 from 5-7pm. Rosary service at 7 pm.  Funeral Service will be held on Friday, September 16, 2016 at Our Lady of Lourdes Catholic Church in Port Wentworth, with Father Tom Murphy officiating. Burial will immediately follow at the Catholic Cemetery on Wheaton Street, Savannah, where Penny will rest forever alongside her beloved son, John, and thus, bringing a new talent to voices of angels.

Offer Condolence for the family of Penelope “Penny” Padgett Young